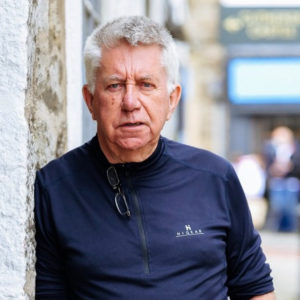 Harry Caunce’s distinctive oil paintings have added a different type of artwork to our gallery. Evocative and often bright, they depict our northern landscape, towns and people in a manner hovering between abstract and lifelike. Many of his paintings show Harry’s sense of humour and touch on his experience as a cartoon-artist. Born in 1944, Harry has lived most of his life in the Ribble Valley village of Mellor. After an early career in industry and retail, it was only by the age of forty he began to study art more seriously and later became a full-time professional artist. Harry can be spotted painting outdoors in and around Clitheroe when the weather permits, but works in a studio during the Lancastrian bad-weather days. Besides being represented by local galleries in the North of England and Ireland his work is in collections in America, Canada, Japan, Australia and many European countries.